I’ve noticed a lot of reaction to the season Luis Garcia is having.  I did try to get y’all to temper your expectations regarding Garcia.  It was never fair of anyone to expect him to rise through the organization like a Ronald Acuna.  Garcia is talented in his own right and will develop in his own time.

Mitch Rupert interviewed Driveline’s Jason Ochart and came away with this excellent evaluation that could be applied to ALL prospects as they move up through organization.

Mitch Rupert, “Phillies minor league hitting coordinator Jason Ochart’s view on Garcia’s season is probably a lot different than a fan’s view, but it’s a very reasonable view where success isn’t necessarily derived from the numbers on his BR page, and that’s kind of development in a nutshell.” 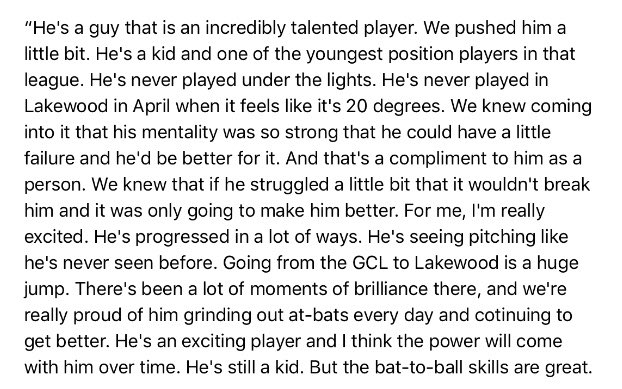 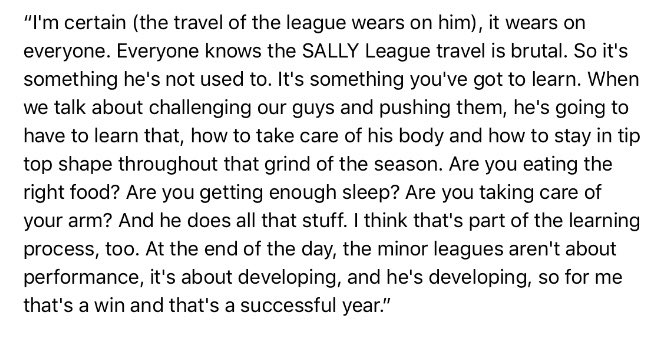 Here’s the link to the whole interview.

(Afraid I may have buried the lead, but I have it on good authority that Spencer Howard will be reporting to Reading Thursday.  I need to check e-mail more often.  Anyway, Gustavo Armas is scheduled to pitch Thursday, TBD on Friday.)

The Threshers could only manage one run on Rodolfo Duran’s eighth inning solo HR (6).  They collected 9 total hits, but went 0-8 with RISP.

The Phils did all their scoring early.  They crossed the plate 4 times in the first inning on Josh Stephen’s RBI single, Jose Gomez’ 2-run double, and Arquimedes Gamboa’s RBI single.  They scored twice in the second on Darick Hall’s RBI single and Cornelius Randolph’s RBI double.  They added 2 very important insurance runs in the fourth on Hall’s 2-run HR (18).

Alec Bohm got the day off.

The BlueClaws scored their first run on a wild pitch in the first inning.  They tied the game with 2 runs in the eighth on Seth Lancaster’s solo HR (2) and Malvin Matos’ RBI single.

Jack Perkins (2.08) pitched four, shutout innings.  He allowed 4 hits and a walk while striking out seven.  Daniel Vilchez (3.26) took a over and carried a 3-1 lead into the eighth inning.  Thru 3.1 innings, he struck out seven, but gave up 3 runs on 4 hits.  Josh Hendrickson (2.61) pitched 0.2 innings and struck out two, but allowed an inherited runner to score to blow the save, and a solo HR to blow the win.

The Phillies scored three runs on a force out in the third inning, Rixon Wingrove’s solo HR (4) in the sixth, and Keaton Greenwalt’s solo HR (3) in the eighth.

The Phillies managed just 3 hits and went 1-8 with RISP.

Rehabbing Ben Aklinski was hit by a pitch and flew out to center before being replaced in RF.