What a way to cap off the 3 day minor-league odyssey- a little piece of history as Nick Fanti (who you probably recall threw 8 2/3 innings of no-hit ball in May) completed a full 9 inning no-hitter.  Only one batter reached base which was a walk in the 2nd inning.  He threw 118 pitches, 79 of which were strikes.  He hit 93 once (based on the stadium gun), and had a bunch of pitches in the 88-91 range.  He had one off-speed pitch of 79 and a bunch in the 80-81 range.  Obviously he worked ahead all day though he did go 3-0 twice.  Charleston fouled off a bunch of pitches as they had trouble squaring anything up, but Nick still managed to get 12 K’s (7 Looking, 5 Swinging).  Like any no-hitter, there were a few near misses.  In the second inning Esteven Florial hit a liner right down the LF line that went into the corner.  It was so close that he ran all the way to second thinking it might be fair, but the 3rd base ump ruled it was foul.  For the last out of the 5th inning, Mandy Alvarez smoked a grounder between SS and 3B but Luke Williams made a great diving stop, jumped up and threw the runner out (wasn’t even that close which gives you an idea of how hard it was hit).  In the 7th inning, Yankees 2016 #1 pick- Blake Rutherford roped a liner the other way (down the RF line) but it was foul.   There were 1 or 2 hard liners right at outfielders, but that was about it-  everything else was pretty routine.   The last two innings went:

The Blue Claws only had two hits- both by Henri Lartigue: Solo HR (games only run), and a single in the 8th that was down the RF line.  He tried to stretch it into a 2B but was thrown out. So in the entire game there were 3 base runners (Lartigue twice – HR and was thrown out stretching), so in reality only 1 player actually stood on base while a pitch was thrown all day.

Mickey Moniak had a rough day:  1) 1st pitch weak 6-3 grounder (hit to the right side of second base but the SS was shifted over), 2) Swinging K (Change Up) 3) Swinging K which was one of the worst calls I’ve seen.  Mickey literally barely even moved the bat at all and somehow the ump, said he swung.  Mickey was in shock and let the umpire know it (which is very rare for him).  He asked for an appeal to the 1st base ump but the home plate ump refused to grant it.  Moniak was still staring at the plate ump as he ran out onto the field. 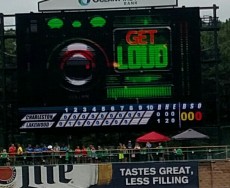 The Phillies began the post-All Star break exactly as they played before the break, losing twice as many games as they have won.  The Phillies went 1-2 in a schedule shortened by the break.  They continue to have the have the worst record in baseball.  They have a 30-60 record and a .333 PCT. END_OF_DOCUMENT_TOKEN_TO_BE_REPLACED

Lakewood lost to Charleston, 2-1 on a two-out, two-run HR by Blake Rutherford in the 9th.

The GCL Phillies do not play on Sundays. END_OF_DOCUMENT_TOKEN_TO_BE_REPLACED