The Phillies’ Fall Instructs started this morning.  Over 70 players took to Roberts and Schmidt Fields to perform required stretching and conditioning exercises around 10:45.  When finished, they split up into smaller groups with position players staying on Roberts and Schmidt and pitchers going to Carlton and Ashburn for long toss to loosen their arms.

When ready, the groups remixed for drills on each of the four available fields.  Seventeen coaches worked with  pitchers, infielders, outfielders, and catchers on various fielding drills.  These concluded with pop up drills.  Then came batting practice. 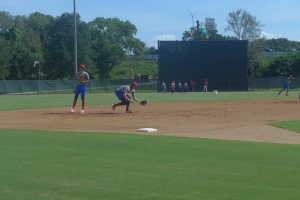 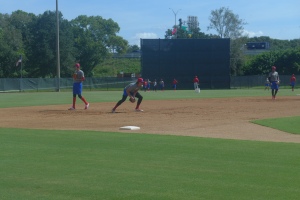 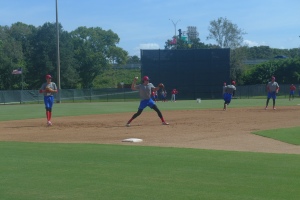 Batting practice was held on all four fields with pitchers meeting on the Seven Mounds.  BP was with a live pitcher and with a pitching machine.  Groups of batters would back and forth between live and canned pitching.

The Phillies made a copy of their Instructs roster available.  They have invited 70 young prospects.  Most are from the DSL and rookie level teams.  Six guys finished at Lakewood, none higher.  Starlyn Castillo is the only invited who signed and did not play this season.

In addition to the seventy invitees, the AFL guys will be here Sunday.  And there are several other players  here.  I spotted some of the guys who finished on the DL – Aaron Loup, Nick Fanti, JoJo Romero, Malvin Matos.  I also saw Cornelius Randolph, Jonathan Guzman, Adonis Medina, Jhordany Mezquita, and Brayan Gonzalez.  I also heard that Jake Scheiner will be here too.

Games are going to be played in Spectrum Field.  I posted the schedule last week, and included the game dates in the Key Dates section of the weekly discussion.

I don’t know what your weather is like, and don’t want to sound like I’m complaining, but it is freaking hot and humid down here.  I don’t know if I can do this every day.  Fortunately, the players have at least 3 scheduled water breaks during their 2 hour ten minute workout.