The minor league camp had a scheduled day off on Monday.  Most players were in and out of the Complex by 9:00 AM.  They received their new group assignments as their spring training games were set to start on Tuesday.

Bad weather kept fans away from the Complex although the weather cleared by early afternoon.  I stopped by to see if copies of the work groups were available.  They weren’t.

In a classic example of poor planning, I had purchased a ticket to the Phillies’ game on Tuesday.  So, I missed the AAA/AA games at the Complex.  I found a perch in the stadium that would allow me to see who was participating and in what groups.  Needless to say, it was annoying to see Aaron Nola pitching at the Complex while I got Drew Hutchinson.

Hutchinson pitched well for a couple innings.  He struck out five, but imploded in the third giving up three runs on two HRs.

The Phils got a run back, scoring without benefit of a hit when Quinn walked, stole second and came around on two ground outs, the second of which was a botched double play attempt when the shortstop missed the bag on a ball chopped up the middle.  It’s nice to see your team get a run in this fashion.  It takes some of the lustre off when they don’t yet have a hit.

The hit situation was rectified when Franco blasted a HR on a 3-0 pitch leading off the fourth.  Franco collected the Phils’ second hit when he singled in the sixth.  He scored the tying run on Hoskins’ RBI double.

Meanwhile, Tom Eshelman was pitching very effectively.  He struck out four in 4.2 innings allowing just three base runners on two hits and a walk.

The Phillies entered the ninth with the game tied.  They got their final two hits in the inning, a single by Rosales and a titanic, game-winning, 3-run  HR by Jesse Valentin. Interesting because (in my mind) these two are probably competing for the utility infielder spot on the bench.  The inning was extended by a two-out error on a two-out throwing error on a ground ball to third.

While moving around the park, I overheard a lot of conversations by Rays’ fans.  Tampa is the local MLB team, but they hold their spring training in Port Charlotte.  So, they routinely out draw the Phillies at Spectrum Field in recent years.  The one common topic was that the Rays pitched Chris Archer.  The prevailing thought was that it was a show case for the Phillies.

Archer was semi-effective.  He allowed two runs on one hit in 4.1 innings.  He struck out five and walked three.  And, he surrendered Franco’s HR.  His FB was 94-95 most of the afternoon, but he rarely threw it for a strike at that velocity.  It’s my understanding that the Rays’ price is high.  Too high.

It was windy and very chilly in the stadium.  I wished several times that I was watching the AAA/AA games with the Complex blocking the wind.

Meanwhile, Mark Wylie went to the Blue Jays facility to watch a little of the two A games over there.  He watched a few innings before having to return to work.  He provided a brief commentary and some pictures.

“The games were played on Fields 2 & 3 at the Jays complex in Dunedin, which made it hard to follow the action on both fields.  I stuck with Group 4 on Field 3, since Kyle Young was the starting pitcher.  The Phillies other starter on Field 2 was LHP Casey Brown.”

“Young looked good and struck out several looking.  He walked one in the second inning, but a double play erased the runner.  Danny Mayer hit a hard line single to left in the top of the third, but was stranded.    Juan Escorcia pitched the bottom of the 3rd for the Phillies.  He struck out the first two runners looking, then gave up a walk and a double, which plated a run, and the batter moved to 3rd on the throw to the plate.  Another walk put a runner on first, before Escorcia struck out the next batter looking.  In the top of the 4th, Josh Stephen led of with a ground single to RF.  He then stole 2nd.  Mims hard line single right at the LF moved Stephen up to 3rd.  Markham walked to load the bases.  Guzman hit a fly to CF that the outfielder lost in the sun and Stephen scored the first run.  Melvin Matos hit a hard line single to left to score another run.  After the Jays got two outs, they rolled the inning with the bases still loaded.  When I left in the middle of the 6th inning, the score was 2-1 Phillies.  On Field 2, the Phillies in Group 3 were leading 3-2 in the 6th.” 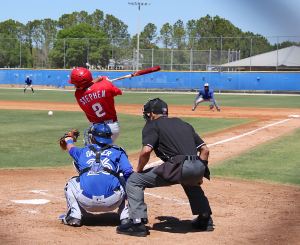 Wednesday’s games at the Complex were AAA and AA again.  The A teams were on the road.  Players took BP prior to the games and before breaking for lunch.  The games were moved up to noon to accommodate the Braves.  The earlier start gave them the opportunity to miss the worst of rush hour traffic on the way home.

The games were played on Roberts and Schmidt, and awkward configuration for fans interested in both games.  A sprinkler timer failed to shut off on Ashburn and the field was not playable.  The AAA game moved to Roberts and the north wind was brought into play.

I moved back and forth freely.  I wasn’t too interested in watching Luis Garcia, Tommy Hunter, and Francisco Rodriguez  pitch so I settled in to see Jose Taveras pitch the AAA game.  He struck out five batters, but had walked the bases loaded when I went back to the AA game.

I was sick and didn’t make it to the Complex on Thursday.

Group assignments have been unavailable and aren’t likely to be available.  I’ll piece them together over the next couple days.  Position players will be easier than pitchers.  Here’s what I have so far –