Daylight savings time, I lost an hour of sleep, and arrived at the Complex a little late.  So, of course, the players were out doing their drills and BP earlier than normal.  One benefit for Groups Three and Four was that the Phillies were to play a night game on the road, so they didn’t have to trudge over to DiMaggio.

I’ve got a few pitching/hitting match ups and Mark Wylie sent me a lot of photos of today’s action.  Once again, no radar guns in use.

You should probably know that Bailey Falter is one of my favorite players in camp.  I have a lot, he’s one of many.  I tell you this in case you think I get to carried away in the following description.  However, those I talked to afterward were equally impressed, and thought his FB was even faster than I did.

Falter pitched against batters who were mostly in advanced levels of the organization.  Five had been invited to the major league camp, one was brought up a few times and got at bats in games, and one was the first round pick last year.  Falter was in Lakewood last year.  I guessed 89-91 on his FB, others were more sure of 90-92 and were impressed with the velocity and his ability to locate.  As you can see above, I assumed FB and SL, but thought I had seen a CB.

I spoke with Falter later.  After I congratulated him on his outing, he said he was pleased with his FB, it’s a pitch he is working on improving.  He was especially gratified that his 4 Ks came on FB.  I hadn’t noticed that.  He said that he threw FB, SL, CH, and one CB.  As you can see above, I have trouble identifying the CH.

I had a brief conversation with Carlos De La Cruz’ father.  He was in the Tigers’ organization in the early 90s.

I spoke with Josh Tols.  He has picked up the language real well.

I had a longer talk with Luke Leftwich.  He has made the adjustment to reliever.  He was a little miffed when first asked, but realized the opportunity it represented.  I suggested the contracts that Neshek and Hunter signal a change in baseball thinking about relievers who are not closers.  He sounds like a very intelligent young man.  He has already completed his degree since being drafted after his junior year.  Pretty cool. 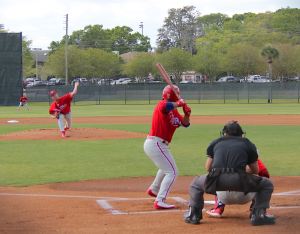 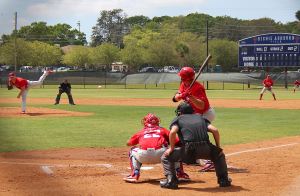 No groups for these guys, yet  – Ricardo Pinto, Enyel De Los Santos, Cole Irvin, and Brandon Leibrandt.  Nor for Nick Rickles and Heiker Meneses who were reassigned. 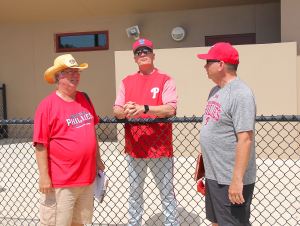