Pointer had a successful off season as his Perth Heat won the Australian Basball League’s Claxton Shield. 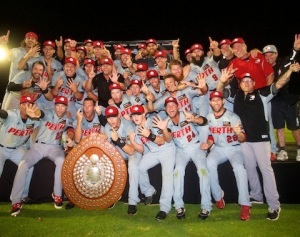 The current poll’s selections so far are listed below.  END_OF_DOCUMENT_TOKEN_TO_BE_REPLACED

So, as Spring Training approaches, I am getting the itch to write a bit, so I am going to do just that as time permits.  With the Phillies roster in transitional flux, Lehigh Valley looks to have an interesting mixture of youthful pitching combined with some AAAA talented hitting.  Lets take a look at the roster possibilities and probabilities.

Catcher: With Cameron Rupp likely to back up Chooch in Philly, The IronPigs should roster two of the Tommy Joseph, Koyie Hill, Rene Garcia and John Hester quartet.  Joseph remains on the 40 man roster but has yet to prove his long term health.  My thought is Hill and Hester end up on the Lehigh Valley opening day roster.

Infield: I think it is unlikely Maikel Franco makes the Phils out of Spring Training for a variety of reasons, with service time implications at the top of the list.  He will be manning the hot corner out of the gate for the ‘Pigs.  At 1B will likely be Russ Canzler, a local product and AAA veteran who did a nice job for Lehigh Valley after being picked up in June last year.  Likely veterans up the middle as well, with Andres Blanco back in the fold at SS to go along with Chase D’Arnaud who was picked up as a free agent out of the Pirates system in the off-season.  Look for Chris Nelson, a high 1st round pick in 2004 to see time all around the infield as a utility player.

Outfield: Look for Aaron Altherr to man one of the OF spots for the ‘Pigs as the 24 year old is on the 40 man roster and spent all of last season in Reading.  The Phillies claimed Jordan Danks off of waivers in the off season from the WHite Sox and the likelihood is that he ends up in Lehigh Valley because of the necessity of keeping promising Rule 5 pick Odubel Herrera on the major league roster all season.  Danks has an option left and look for the Phils to use it.  Oft injured Kelly Dugan is likely to see substantial time in the Lehigh Valley outfield this season.  As a member of the 40 man roster and a fairly consistent hitter in the minors, Dugan could play himself into a 4th outfielder contender for the Phillies come 2016.  Look for the other two outfield roster openings to be filled by 2 of the following: Cameron Perkins, Jeff Francoeur, Brian Bogusevic, Darin Mastroianni and Xavier Paul.

Starting Pitching:  This is an area that looks to be  very interesting with significant talent coming into the organization through trades and additional talent coming back from injury.  Sean O’Sullivan and Kevin Slowey look to be the veteran presence on the mound for Lehigh Valley,  Both have major league experience and have experienced success at AAA.  Look for both to eat significant innings for the ‘Pigs.  Both Adam Morgan and Jonathan Pettibone return from significant injuries and will be watched closely in the Spring with the hope that they rejoin the Lehigh Valley rotation in the short term. My expectation is that Miguel Alfredo Gonzalez will be in the Lehigh Valley rotation at the beginning of the year.  The Phils have hoped to move him back into the rotation and assuming he has command, he is at the AAA level.  Look for Joely Rodriguez, acquired in the Antonio Bastardo deal from the Pirates to open the season in the Lehigh Valley rotation as well.

Bullpen: Cesar Jiminez is back with the organization and all but guaranteed a bullpen spot after a successful 2014 with both Lehigh Valley and Philadelphia.  Ethan Martin is likely to be in the IronPig  ‘pen after a disappointing 201 during which he was often injured and pitched poorly. Hector Neris is a dark horse for the Phillies bullpen but more likely ends up in Lehigh Valley.  The Phils brass have been extremely impressed with Neris during winter ball and at the end of 2014.  The other four spots are likely to be filled by some combination of Elvis Arajuo, Nefi Ogando, Tyler Knigge, Jeanmar Gomez, Ryan O’Sullivan and Colton Murray.