Game two.  The Double-A Phillies hosted the Blue Jays.  They were perfect hosts allowing the Jays to come back and win 7-5.  Shawn Williams is the manager for the Fightin’ Phils.  Tyler Henson is the hitting coach, Brad Bergensen is the pitching coach.  With 3 Phillies’ coaches on the Covid-IL, Williams was absent.  I hear he’s in Allentown.

Games earlier in the week were canceled due to weather.  We are entering our rainy season.  Usually just means short showers sporadically throughout our weather zone.  But, we got heavy rain that washed out games and outdoor baseball activities.

Those scheming’ American Leaguers rolled innings twice when we had scoring threats – first and third, 2 outs and runner on second, one out.   Here’s my boxscore.

Two leadoff walks led to a 3-run inning and two-run lead for the Blue Jays in the seventh.  But, the Phils responded with two leadoff walks of their own in the bottom of the inning and scored on LukeMiller’s sac fly after a wild pitch and Jack Conley’s mammoth RBI double off the left-center field wall.

Two runs in the eight sealed the eventual victory for the Jays.  Here’s my pitchers’ box.

The first two pitchers were stretched out to three innings and 40+ pitches.  Ethan Lindow was effective.  He struck out two, walked one, and collected 7 air outs – a line drive, a popup, and 5 fly outs.  The 2 hits were solidly struck for a double and HR.  I think the same batter had both hits.

Julian Garcia gave up a leadoff walk that came around to score.  After that, he was darned good.  He struck out the side in the sixth, threw 27 strikes in 40 pitches (67.5%), and pretty much dominated the Jays.

Austin Ross opened the seventh with back-to-back walks on 9 pitches.  Then he found the strike zone and gave up 3 runs on 3 hits.  He did induce a double play ball.

Robinson Martinez looked extremely sharp during warm-ups before the eighth inning.  He had difficulty continuing to throw strikes when there was a batter in the box.  He gave up 2 runs, a couple of hard hit singles, and a hard hit sac fly to center.

Joel Cesar started the ninth with a 4-pitch walk.  He gave up some hard contact and loaded the bases with another walk before escaping any scoring damage with a popup.

Josh Tols entered the game in the fourth inning.  Garcia had a runner on first and 2 outs.  It was a lefty v. lefty situation, the kind of situation Tols will see in Reading.  He has a slow fastball, but a curveball with the highest spin rate in the organization.  He walked the lefty but got the righty.  The batter almost spun into the ground trying to hit the curve.

Gamboa swung the bat well.  His HR was a no-doubter to left.  He made some nice (show-boaty?) flips to second.

Kroon’s HR was to right field, close to down the line.  The right fielder just turned and watched, then took a belated courtesy step toward the wall.

CJ Chatham batted out of order (intentionally) in the fourth inning.  (He batted third, in front of Gamboa’s HR.)  We speculated that he’s probably headed to the Alternate Site.

The Jays stole 3 bases, we had one by Gamboa.  We also advanced 3 runners on 2 wild pitches.

Tomorrow is a camp day. I’ll be back at my post Friday 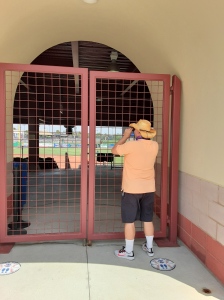