I was on hand on Wednesday and Thursday.  The workouts were similar to those I wrote about on Tuesday.  Variations included lateral movement and balls in the sun for the outfielders, bunt defense and the wheel play for PFPs, and rundowns and repetitive infield drills with some guys seeing time at different positions for the infielders.

Some of the infield pairings I saw were –

Gamboa covered a lot of ground and made several amazing catches during the drills.

During batting practice, I was drawn to the fields that had live pitching rather than the machines and over the course of the two days I watched Mayer, Muzziotti, Carlos De La Cruz, Gurrola, Moniak, Williams, Green, Zoellner, Guthrie, Gonzalez, Maton, Fitch, and Pelletier.

Carlos De La Cruz is interesting because he is 6’8 and 210 pound 17-year old.  I watched him bat off a pitching machine one day and he reminded me of Garry Maddox with his wide stance, small bat, and swing/follow through.  The next day against the machine, he looked more comfortable at the plate, looked like he had a different bat, had a better swing and allowed his back hand to come off the bat on his follow through.  He still struggled against the machine but looked better and actually crushed 2 balls over the LF fence.

The Phillies have put out an updated roster that does not include 3 players on the one BA released earlier.  Addison Russ, Daniel Brito, and Jose Gomez have been left off due to their winter ball commitments.  Aaron Brown is on the current list.  Without Brito and Gomez, there are only 15 infielders at Instructs.  I have seen all players headed to the AFL except Elniery Garcia, but I’m sure he is here somewhere.  Add Bailey Cummings and Kevin Gowdy to the list of rehabbers in attendance.  Gowdy’s arm is in a brace, I don’t think he is able to do much with it.

Saturday, the kids played a game against the Blue Jays Instructs squad.  Those who took part were ( bold = AFL, bold/italics = rehab) –

Note that with Quinn starting in center, Moniak slid over to left.  And Williams (who I also saw taking reps at first base earlier in the week) was Moniak’s replacement in left.

Roman Quinn provided excitement when he drove a ball into the right center field gap. The ball bounced to the fence and Quinn motored into third without a throw. (pictures courtesy of Mark Wylie) 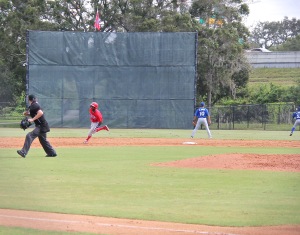 The Phillies fell behind then tied the game early at two.  They gave up some more runs and were looking at a 6-2 deficit.  They rallied for one run and had runners on the corners with one out when the cowardly Blue Jays rolled the inning.  Trailing 6-3 entering the bottom of the ninth, the Phillies rallied on Carlos De La Cruz’ 2-run single to tie the game.  The game ended as a tie. (pictures courtesy of Mark Wylie) 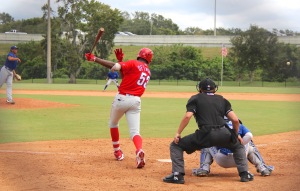 Here is the 2017 Instructs Schedule.

Here are a couple shots from my cell phone of some pitchers during PFPs.

Some of the young guys look bigger to me.  I haven’t seen them since spring training but Mickey Moniak and Josh Stephen both look bigger across the shoulders than I remember. Moniak looks a little thicker in his upper legs too.