Here is the box score recap.

Clearwater was scheduled off.

The GCL Phillies won, 7-4, and moved back into first place in the division when the Blue Jays lost.  I missed half the game because they moved the start time up to 10:30 AM.  So, I won’t have a separate game report.  Manuel Silva pitched five innings and only gave up one unearned run.  Justin Miller gave up one run and left with the bases loaded.  IMO, he was victimized by his defense on a ball that should have been caught and would have defused the inning.  Oscar Marcellino stranded all three runners when he got the third out on a K. Rafael Carvajal gave up 2 late runs as the Phillies held on for the win

Most of the offensive action occurred before I got to the game.  The Phillies scored 4 runs in the third inning on a force out off the bat of Rafael Marchan, a 2-run triple by Ben Pelletier (.333), and an RBI single by Brayan Gonzalez.  They score 2 runs in the fourth on a 2-run single by Quincy Nieporte (.325).  And they tacked on a run in the sixth on a throwing error.

It was surmised that the game time was moved up due to the solar eclipse.  But, I think that the start time was moved up so that Phillies personnel could attend the service for Darren Daulton.  After the game ended, several coaches and other Phillies people I recognized rushed out to their cars, dressed in appropriate clothing. 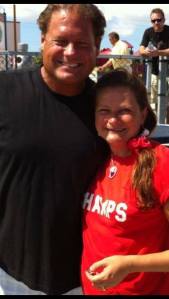 Darren Daulton was a local personality in Clearwater.  He was the most approachable celebrity I have ever seen.  When he spoke with you, he gave you the feeling that you had been life-long friends.  He always gave the impression that he remembered you from the last time you saw him.  The photo above is from the first time I actually met Darren.  We were at our first spring game after moving to Clearwater – the Florida State game that the Phillies played before the 2012 Spring Training games started.  We were in the Tiki Terrace, and we saw Darren walking from Frenchy’s toward the third base concourse.  My wife held up her camera and implored him to pose for a picture.  Darren stopped, turned, and smiled.  Then he said, “No, no not like that.  You come up here and get in the picture, too.” He was personable.  He was patient.  He was a man’s man.  He was a woman’s dream. Darren was like this with every fan I saw approached him.  Every time.  He was still outgoing the last time I saw him at the Complex during Phantasy Week this past January. He had been in the hospital but came to the Complex to see his former teammates.  When he exited the clubhouse, he was recognized and surrounded by the small group of fans who happened to be outside the door.  He was so unsteady on his feet that Tommy Greene discreetly placed the palm of his hand on Dutch’s lower back to steady him.  After several minutes, Greene helped him to and into a waiting vehicle.  Even during his weakest moment, Darren put the fans first.