So I’ll post this graphic here with whatever info I can compile from the various media reports. I’ll try to scan through the comments here for that kind of info, so if you see I’m missing something, just make mention of it in a new comment at the bottom of the page, and please post any media links if you have them, so I can save them on my end.

The height and weight info and other stuff came from MLB last year, and I’ll just plug that in when it’s up on that site. Until then, just assume they’re all 6’3″, 210lbs, and chiselled out of granite. Click on the graphic to enlarge and you can zoom in with your browser and whatnot from there. I have also added this to the “2013 Draft” from the “Draft” Menu at the top, so even if it’s not stuck on the top of the site, you can find it there.

Updated 6-10-13, 3pm with a bunch of news items/tweets, and bonus money for Martarano, which is to be split between a signing and a reporting bonus somehow. In case, I guess, he never comes to Phillies camp and just keeps playing football, they keep the second $50k.

Updated 6-11-13, 12:30pm – a couple more signings reported by media and on Twitter. I got the height, weight, etc., as well, and added a dummy signing date of today for all the guys we know have signed. Until MLB gets us the real dates, we’ll just have to live with that. Hopefully we start to see some more bonus info shortly for those high picks, at least, and for a guy like Meadors who could theoretically look for more than $100k to sign.

Updated 6-13-13m 5:15pm – Added the Shane Martin bonus and savings, (which covers about 75% of the overslot on Sandberg), and the signing of UDel’s Nick Ferdinand.

Updated 6-14-2013 9:05pm – Added signing dates for all the guys the Phillies MLB site now includes. Added the bonuses for Knapp, Sweaney and Parr, updated the calculations, and highlighted the signed picks in green.

Updated 6-17-2013 12:45pm – Added JP Crawford and Jan Hernandez as signed. Crawford tweeted about it and Hernandez had an article in Puerto Rico indicate he has signed. Your turn, Jason Monda. Maybe.

Updated 6-18-2013 4:00pm – Added JP Crawford’s signing date of today, added bonuses for Williams and Prosinski and updated the calculations. BTW, I changed Ben Wetzler to Ben Wetzler-Holmes – the Phillies site on MLB lists him as Holmes, I’ve seen it hyphenated like I have it, so that’s how I’ll leave it.

Updated 6-20-2013 3:00pm – Added the slot for Crawford and Hernandez (newly reported by BA’s Jim Callis), a couple notes, and a new calculation to back out the slot amount for Jason Monda, plus that ugly dark tan/gross brown highlight to indicate he won’t sign. That’s what I think of that decision. It’s “ugly dark tan”.

Updated 7-9-2013 5:30pm – Dan Child’s bonus at $100k and Tyler Viza’s at $160k, both per BA. Lowers the pool amount. Deadline looms Friday. I still have Martarano’s bonus on there, though no signing date, based on what we read earlier. Have to wonder if there’s still uncertainty there as neither the Phils nor BA has him as signed.

Updates 7-13-2013 10am – Added Keys and the bonus and the tax info, added Wetzler not signing. Unhighlighted Martarano, though I’m not sure that didn’t still happen. Added Venn Biter as signed with no known bonus info. So I guess there will be at least one more update to this graphic. 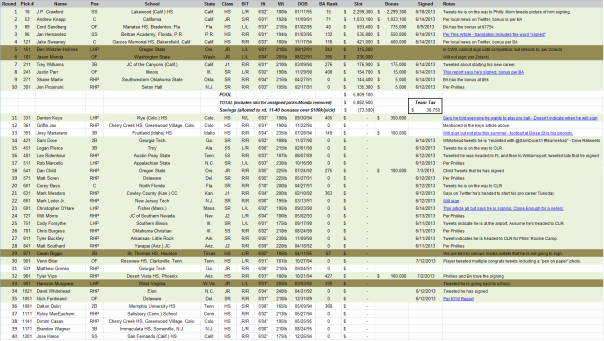