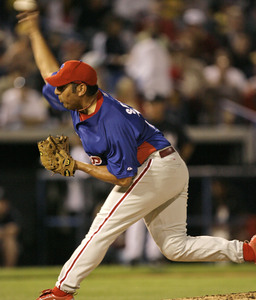 The latest hot topic appears to be Zach Segovia moving into a position to make the bullpen out of spring training. The Inquirer makes a brief mention here, citing his most recent impressive outing against the Yankees, and the Daily News talking about his control and composure. This idea seems to really be picking up steam recently, and maybe more because of everyone else’s general state of suckitude rather than Segovia’s complete dominance. As I highlighted in my profile of Zach, pitching out of the pen, at least for now, might be his area of greatest value to the big league club. The overpowering velocity isn’t there, the strikeout numbers aren’t there, but he doesn’t walk a lot of guys, and that’s an important component for any quality reliever.

Quick update on our top Draft and Follow prospect, Rashad Taylor. Through 71 AB, his batting line:

Also, a plea to my fellow Phillies fans….don’t panic about Cole Hamels and his spring struggles, he’s going to be fine.