What happened to Day Two?

I arrived at the Complex at 10:40 AM.  The guard, Rick, told me that I missed batting practice which had ended at 10:20 AM.  (I found out today that BP consisted of Andrew Knapp, Rafael Marchan, and Jeff Mathis.  It started at 10:05 and lasted just 15 minutes.)

Not knowing that the BP participants were the spring training catchers, I drove over to the Field (I’m not sure but I think they are negotiating naming rights) and peaked in through the West and South Gates.  Nothing was happening but the outfield was set up for agility drills.  Most likely for the position players who have reported early.

I returned to the Complex.  The pitchers were on Schmidt again.  I didn’t feel like trying to identify players over a football field away.  So, I went home to wait for the minor league schedules to be released.

Day Three, I got to the Complex by 9:30 AM.  I wasn’t going to miss BP again.  Wrong!  Mother Nature stepped in.  When I left the house, there was an ominous front to the north and west.  But, Florida weather is funny.  I’ve seen rain on one side of the street and not on the other more than I saw that in Philadelphia.  I’ve driven into a drizzle, then heavy rain, then drizzle, then nothing more times than I can count.  So, there was an equal chance that the weather would move on or just sit there.

I was wrong.  Well before ten, it started to drizzle.  And then turned to heavy rain.  Enough to drive BP indoors, so I called it a day and returned home. 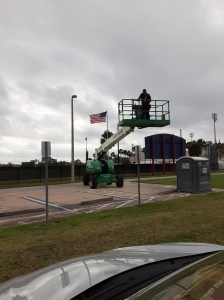 It’s a shame.  I arranged for a lift so that I could get a better view of Schmidt Field.

I didn’t plan on returning until Monday, but my friend Mark is coming up Saturday.  So, I’m going to try again tomorrow.

Tracy is doing well and has been working for Door Dash.  We all know where the minor league players stay when the Phillies provide rooms.  But, she has been delivering meals to a hotel where some better paid Phillies are staying.  She is very proud that she solved this little mystery, even more so since I haven’t.

Oh, there was a post by a ball writer that opined that the difference between Spring Training and Mini Camp is the amount of money the organization has to pay each group, $3200/week for ST and $400/week for MC.  Well, I was proud to learn that the Phillies are paying the higher amount to players in each group.  Maybe all teams are doing this, I don’t know.

Here are some photos from spring trainings past.