The Phillies split six games this past week in Florida.  After seventeen games, the Phillies have an 8-7-2 Grapefruit League record.  But, record isn’t a legitimate indicator to measure the team’s progress.  After all, the Phillies posted a National League third best 15-11-3 record last spring and still managed to finish 20 games under .500 during the regular season.

The slash of the players expected to make the 25-man roster might provide some insight into any offensive improvement and what we can expect this season.  The projected starters are Rupp, Joseph, Hernandez, Galvis, Franco, Hendrick, Herrera, and Saunders. Add bench locks Blanco and Altherr, expected backup catcher Knapp, and an additional middle infielder and outfielder (Valentin and Williams for this exercise since they have the best slashes of the players on the 40-man roster).  So far this spring, these 13 players a .232/.293/.378/.671.

Here’s the open discussion thread for Phillies’ talk and other topics.

Key dates remaining during the off season:

The first “cuts” were made after Sunday’s game.  The Phillies reassigned the following players to minor league camp – Rhys Hoskins, Scott Kingery, Chace Numata, and Andrew Pullin.  Pullin hasn’t been on the field since February 27th and is rumored to have an oblique strain.

The Phillies traded Joey Curletta (the PTBNL in the Ruiz trade) to Seattle for switch-pitcher Pat Venditte.  He will join the Phillies as an NRI when Italy is done in the WBC.

I’m not a fan of the WBC.  For many reasons.  But I did DVR Italy’s and Columbia’s games to get a look at Nick Fanti and Jorge Alfaro.

Fanti pitched an inning today.  He allowed 2 ground ball singles and struck out T.J. Rivera who batted .333 in 33 games and 105 AB with the Mets in 2016.  I got this head shot of Nick as he left the field after Italy’s on field celebration after scoring 5 runs in the bottom of the ninth to beat Venezuela. 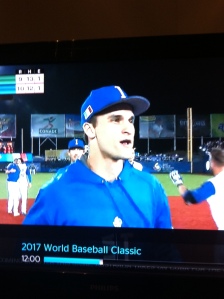 Alfaro went 3-12 in 3 games.  His HR in the 8th inning against the Dominican Republic tied the score.  He celebrated his HR of Fernando Rodney by shooting an arrow as he neared the dugout.  Just prior to this photo he drew an arrow from his imaginary quiver. 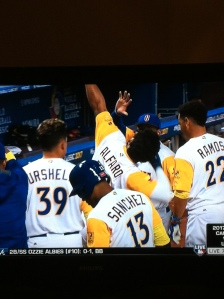