Six more days until opening day for Lehigh Valley and with that, the Phillies have announced the ‘Pigs roster. The roster is as follows:  Players age in (    ). Bold indicates on 40 man roster.  Look for Jake Thompson to get the nod opening day.

Notes: The roster contains 6 of the top 10 prospects in the Phillies system (Baseball America)

–Expect to see Luis Garcia as the closer at the beginning of the season.

–Hector Gomez played in the Korean League in 2016 and hit 21 homers.  He has played in the majors for both the Rockies and Brewers.

–The ‘Pigs play the Reading Fightin Phils in an exhibition game on Tuesday in Allentown before opening the season next Thursday against Pawtucket at 7:05.

The Phillies completed their 25-man roster Thursday.  Luis Garcia was optioned early and back at the Complex in the morning.  Word filtered around that Adam Morgan and Joely Rodriguez would join the bull pen and complete the pitching staff.

After their blow out loss to the Yankees, Daniel Nava and an emotional Brock Stassi were selected for the final two roster spots.  Jesse Valentin was optioned and Tyler Goeddel was designated for assignment to create the needed 40-man roster spot. END_OF_DOCUMENT_TOKEN_TO_BE_REPLACED

Camp Day featured one, short intrasquad game at the Complex.  Line ups for both teams consisted of a lot of Group 2 and Group 3 players.  Group 5 sent a bus load to St. Pete to play the Canadian Junior team.  A lot of guys had the afternoon off and either watched the game or took advantage of the time off and left the premises.  The game ended shortly after a large pizza delivery. END_OF_DOCUMENT_TOKEN_TO_BE_REPLACED

I found the following in my mail box from one of our readers.  We met last season, but I hesitate to use a person’s name without explicit permission in a post.  It is the account (with minor editing) and some pictures from one of the minor league games at the Yankees complex on Monday, March 27th.  Thank you very much, sir.

“Hi Jim,
I got back late on Sunday night, so I wandered over to the Yankees complex and watched one of the two A games going on.  The Phillies beat the Yanks 6-4.  Barbier and Wojciechowski hit home runs in the 5th inning to give the Phillies the lead.  Reggie Jackson was watching from the Yankees dugout.  Other notables: D. Hall ripped a sharp single to right, Danny Zardon hit a double off of the center field fence Jhailyn Ortiz lined a single to left center, and Rodolfo Duran hit a sharp single to right field and also threw out a baserunner attempting to steal 2nd.
Attached is a photo of the home run ball leaving Wojciechowski’s bat on its way over the right field fence.  Barbier’s homer also went out in right field.

Trevor Bettencourt pitched the 8th and had an effective change up.  Jake Kelzer closed out the ninth.  He gave up a 2 out one-run home run.  Due to my being in zombie mode from the flights back, I can’t remember who started for the Phillies, but he was sharp through 6 innings.
In separate e-mails, I will attach photos of R. Duran’s single to right, and Yankee attempts to pick him off of first base and second base.  You can use any of the photos on the blog. 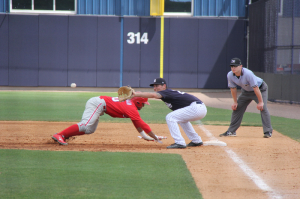 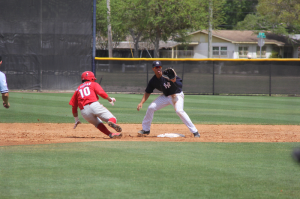 I am hoping I can sneak away on Friday and get over to Clearwater to see some of the activities at the complex.  Hope to see you, if not, I know I will run into you sometime later this Spring or during GCL games after the draft.”
Thanks again, sir.  I look forward to seeing you at the Complex.

Two morning games at the Complex Tuesday.  Clearwater and Lakewood faced the Blue Jays Single A teams at 10:00 AM.  Lehigh Valley, Reading, and the short-season group took the long bus ride to Dunedin. END_OF_DOCUMENT_TOKEN_TO_BE_REPLACED

The Phillies made several moves today getting them closer to their 2017 opening day roster. END_OF_DOCUMENT_TOKEN_TO_BE_REPLACED

The Yankees visited the Carpenter Complex, and AAA and AA games were played on the two worst fields for fan viewing.  Zach Eflin pitched in the AAA game and Elniery Garcia started for the AA squad. END_OF_DOCUMENT_TOKEN_TO_BE_REPLACED

The Phillies went 2-3-1 last week.  After thirty games, the Phillies have an 11-15-4 Grapefruit League record.  The Phillies play 6 games this week – night games Monday and Tuesday against the Blue Jays in Dunedin and at home, two split squad games on the road Wednesday, and home games Thursday and Friday. END_OF_DOCUMENT_TOKEN_TO_BE_REPLACED

Wednesday was a camp day.  The intrasquad games were moved up to 11:45 and almost over when I got to the Complex at 12:45.  So, I went to Legends with a friend and talked baseball while watching the Phillies and Yankees game.  When I got home, I saw the announcement about Dallas Green’s passing.  I didn’t feel like writing, so I dusted off the Pace of Play article that had been sitting in queue for a couple weeks. END_OF_DOCUMENT_TOKEN_TO_BE_REPLACED

Several weeks ago we conducted a poll on Pace of Play.  Around the time that I ran the poll, there was a lot of sentiment both for and against changes that might address the perceived slow pace of play in major league games. END_OF_DOCUMENT_TOKEN_TO_BE_REPLACED