So let me share what happened today when the Yankees arrived at the Complex for games against two of the Phillies’ work groups.

A coach disembarked from the team bus and approached a group of fans and asked, “Want a souvenir line up?”.  He handed out a bunch of game line ups until he ran out.  As you can see, it even includes the starting pitcher. 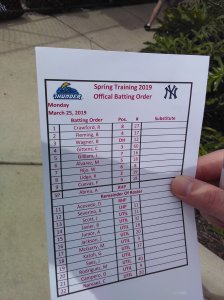 I walked over to the Phillies’ dugout and asked the manager who would be pitching for us.  His reply was, “I don’t know, I’ll have to check with my pitching coach.”  I even said please and thank you.  I recognize when I’m being blown off.  Can you imagine a manager 5-10 minutes before game time not knowing who would be pitching?

This is what we’ve had to deal with down here the past couple years.

By the way, the Yankees have provided line ups for the XST and GCL games I’ve attended at their minor league complex.

On my own, I was able to figure out that Nick Pivetta was pitching on the back field.  My network of spies identified Andrew Knapp and Roman Quinn also on the back field.  I watched an inning of Pivetta throw mostly off speed pitches.  The couple FB he threw were 92 mph.  Quinn played 4 innings in CF and then was done for the day.

Over on Ashburn, I identified Robertson as the starting pitcher.  It was easy as the minor league uniform is gray pants and the major leaguers come over wearing their white, pinstriped pants.  Maybe, I’ll pass that along to the coach.  Robertson pitched well.  His only base runner reached on an error and was erased on an inning-ending double play started by Alec Bohm.

JoJo Romero pitched innings two thru five.  He struck out four batters and his FB was in the low 90s.  Bailey Falter pitched the final four innings.  He also struck out four.  (In a personal message to a family member, his foot was pointed correctly on each pitch.  I watched for you.)  His FB topped out at 90 mph.  He threw a CB around 73-74, and a SL or CH around 79-81.  Both pitches froze the Thunder batters.

Somebody gave up a run, I can’t remember which pitcher. I don’t recall any walks.  I think there were just two hits.

Our guys fared a little better.  Mickey Moniak had an RBI single and Alec Bohm added a SF.  They added a run in the ninth after having already chalked up a 2-1 victory.  Darick Hall had 3 hits including a double.

There were a mix of AA and A+ guys in the line up.  Scheiner played first.  Grullon caught.  Moniak played CF.  Bohm played 3B.  Randolph and Vierling were the corner OF.  Hall was DH.  Brito played 2B.  I forget played SS and I think Luke Williams was the other DH.  Antequera might have been in the mix some place.

The Phillies re-signed SS Andrew Romine to an MiLB contract and assigned him to Lehigh Valley.

After the affiliated teams go north or move across the Complex, XST will be augmented with about 20 players from the Dominican Academy. Subtract 100+ and add 20+ and the remaining 120 or so players might each get their own locker in the club house.

Well, that’s all until tomorrow.