Jose Taveras was your selection as the #30 prospect in the Phillies’ organization.

Taveras is a curious prospects.  He’s big and friendly with a quick smile.  In spite of his size, he does not look like the prototypical pitcher.  On the mound, he throws with an easy motion that gives the impression that he’s just tossing the ball to the catcher.  In the 5 starts I charted, his FB sat 89-91 mph in three games and 90-92 mph in the others two.  He get it up to 93-94 mph on occasion.

But in addition to what most of you would consider a pedestrian fastball, he possessed a change up, slider, and curve ball.  His change up was considered the best in the Florida State League.  He has very good command, and moves the ball around the strike zone effectively.  And, he can change velocity at will.  I can remember charting his games where he threw multiple pitches at each velocity from 76 to 94 mph.

He also has the uncanny ability to not get rattled when he walks a batter or an error is committed behind him.  I was pleasantly surprised how effective he was in Clearwater.  The league was too as he was voted the started in the FSL All Star game.  He pitched a perfect inning and was awarded the win.

We began our Tuesday with our morning ritual of identifying new faces as the players walked past us on their way to the left field foul line on Roberts Field.  Today we spotted six – Rhys Hoskins, Jorge Alfaro, Tommy Joseph, Brandon Leibrandt, Andrew Pullin, and Matt McBride.  These bring my count to 39 players in Clearwater.

The players did their stretching, sprints, and long-tossing and broke into their groups – pitchers and catchers to the Seven Mounds to pitch out of sight (grr!), outfielders to center field to shag balls hit from the right field foul line, and infielders took ground balls (only Florimon at short today, I didn’t see Walding today).

They batted under the watchful eye of Charlie Manuel. 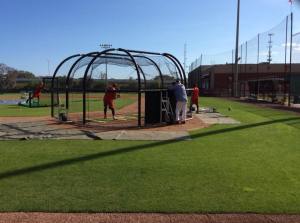 Hoskins crushed a ball over the left field fence and I commented, “the launch isn’t scheduled until 1:30”, a vague reference to the rocket going off on Florida’s east coast.  After all the hitting was done, Charlie had a long talk with Cozens out by the mound.  Seemed to last at least ten minutes, maybe more. We noticed that Cozens was swinging with mostly his arms, little use of his legs, and an imperceptible shift in weight from his back foot to his front.  It seemed clear that they were talking about hitting based on the motions Cozens was making, and really, Charlie knows hitting.  I’ve heard that Cozens is slow to take advice, so it will be interesting to see if he makes any changes tomorrow.

As players left the field, McBride took grounders at first, throwing to a coach at second.  I difficulty recognizing Pullin.  He’s sporting a full beard.